Hypnotherapy in Orlando for Prescription Drug

Hypnotherapy by contrast is safe, reliable and quick when dealing with prescription drug compulsive behavior for most people.

Prescription drugs are the second most commonly abused category of drugs. According to the National Institute on Drug Abuse in 2010, approximately 16 million Americans reported using a prescription drug for non-medical reasons in the past year; 7 million in that past month.

Other prescription drugs that are commonly abused include:

Get a Free Consultation and Save 40% on Our Program This Month!

Some signs of prescription drug abuse include:

The traditional stereotype of the typical alcoholic or drug user is not longer valid. The ” new” addict is often educated, professional and belongs to a higher socio-economic group. They may not “get drunk in a bar every night” or “strung out on heroin in the street”, but they are, indeed, addicts… the “new” breed of addict.

They may take their pain pill before the pain comes “so it doesn’t get too bad”. Before they know it, they’re addicted. But not really, because they’re still functional and, after all, the doctor prescribed them. The lines become so blurred, denial is easy.

Hypnotherapy allows for the resolution of the issues that caused the addictive behavior in the first place. What is the point in treating an compulsive behavior as the primary source of the problem when it is in fact only a symptom of deeper problems. Often the compulsive behaviors in this particular group are both physiological AND psychological. For example, pain management hypnotherapy is key when dealing with prescription pain medication abuse. Additionally, hypnotherapy is used to ease and end the conditions requiring many anti-anxiety, anti-depressant, and sleep disorder medications that were meant only to treat a symptom in the first place. Not for long term use.

Rather than teaching that an addict is helpless against their compulsive behavior and must attend meetings for the rest of their lives, our clients do not define themselves by their compulsive behavior. Instead, they are led through a process that allows them to solve the underlying issue(s) that led them to become addicted and thereby solving the whole problem, remaining drug-free and able to finally enjoy life as they always wanted.

Orlando Hypnosis Clinic‘s compulsive behavior recovery program is nothing like 12-step programs because it is based on a completely different paradigm. Where the 12-step programs come from the belief that someone with an compulsive behavior is destined to be an addict for the rest of their lives, our program looks to the current research in neuro-science which shows that people continue to change the way they think, and therefore behave throughout their lives.

Rather than attending meetings, (the program can be used in conjunction with 12-step or other recovery methods) they complete a set hypnotherapy sessions, usually six to eight depending upon the individual, over the course of a month. Each session builds upon those that came before, so that by the end of the month, people engaged in the program have solved the underlying issue (sensitizing event) causing the need for using, learned how to deal with self-sabotage and have vastly improved their self-esteem. They have also developed the beliefs, values, boundaries and internal identity of someone who has no need for the substances or behaviors they used exhibit.

Why Us? We Have The Best Hypnotist, Program, & Support Around

Get a Free Consultation!

An Amazing Program: Gets to the Source of the Problem Fast!

Rather than teaching that a person has or inherited a disease, is helpless against their compulsive behavior and must attend meetings for the rest of their lives, our clients don’t define themselves by a substance or behavior.

Most often there is an initial sensitizing event (ISE) or closely related group of events that has precisely contributed the alcohol compulsive behavior.   Hypnotherapy helps remove that pivotal event as an underlying dynamic in someone’s life- an event that has served as the root or origin of subsequent factors and events.

Solve the underlying issue(s)  —>  that caused the emotions  —> which led  to the addictive behavior  —>  thereby solving the whole problem, remaining drug and/or alcohol free and able to finally enjoy life as they always wanted. 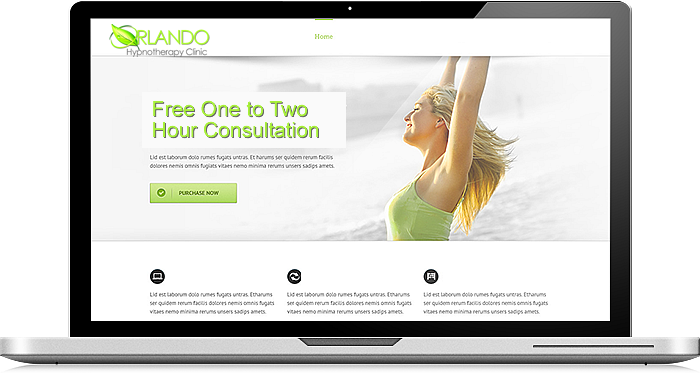 We have helped thousands of people get & stay free from addictive urges all over Florida and in Orlando with hypnotherapy!

Join Orlando Hypnosis Clinic's Member's Only Program & Save 40% on all of our Sessions and programs by becoming a member today. Benefit from Member-Exclusive Offers, Video Reviews and Personal Stories, On-Site Classes & Events, & Much, Much More! Enter your email below!

*This information should not be treated as a substitute for advice given by your General Practitioner, Medical Doctor, Psychiatric professional or any other healthcare professional. We encourage you to check with your physician before attempting any new therapies. We commonly work with our client’s health professional to provide well-rounded adjunct solutions when needed. Success from any kind of coaching, medical or hypnosis process cannot be guaranteed. Individual results will vary greatly and in accordance to your commitment, effort, determination, hard work, and ability to follow directions.
Schedule an Appointment

Simply imagine, in just a few sessions you can stop coping and start living! Isn’t it time you gave it a try?

Think of the consultation for our clinical hypnosis and hypnotherapy programs as a one-hour motivational interview for both of us. We want to make sure we can help. We take an in-depth look into your lifestyle to see what barriers you are hurdling, emotional issues you’re dealing with and the behaviors the emotions are causing.  Next, based on how long you’ve been dealing with these issues and how severe they are, we begin constructing a solution. We make absolutely sure during this consultation that you’re a good candidate for clinical hypnosis or hypnotherapy.

During your consultation, we will answer any and all questions you have about clinical hypnosis and hypnotherapy because let’s face it, there’s a stigma surrounding hypnosis. How can something used as stage entertainment help you? Right? We’ll cover everything until your comfortable and confident in us, our recommended program, and in yourself. Next, there’s no obligation to move forward.  Take time to think about it or talk it over with your supporting friends or family members.

Orlando Hypnosis Clinic built its reputation using hypnosis and hypnotherapy merged with the proven methods of traditional therapy for the past thirteen years.  Our clinicians include licensed mental health practitioners for your safety as well as the highest educated and certified in NLP and hypnosis techniques. Our goal is to help you using the care, research, and experience on a one-on-one basis; and to eliminate the root cause of your unwanted emotions and behaviors for good.  By using two separate therapies together, we can cut back years of therapy into just a few weeks saving you money and time!

We created unique paradigms using multiple disciplines in mental health combined with hypnotherapy that successfully help you end chronic emotional and behavioral issues.  You can finally find the freedom from phobias, emotional trauma, weight management and self-image, depression, and anxiety, to name a few.   Our clinicians include licensed mental health practitioners for your safety as well as the highest educated and certified in NLP and hypnosis techniques. Our goal is to help you using the care, research, and experience on a one-on-one basis; and to eliminate the root cause of your unwanted emotions and behaviors for good.

*
*Success from any kind of coaching, medical or hypnosis process cannot be guaranteed. Individual results will vary greatly and in accordance to your commitment, effort, determination, hard work, and ability to follow directions.